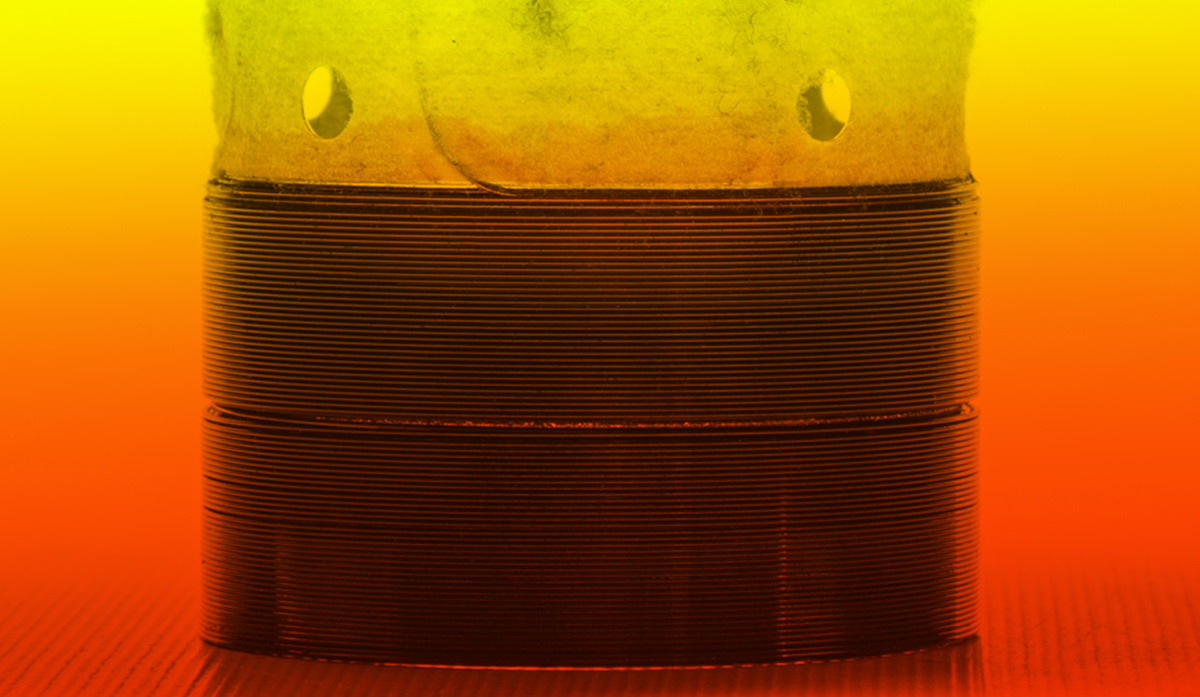 Ever been baking cookies, only to find out that the softened butter you need is still in the freezer?

We get a lot of emails here at the Tech Talk. People ask us, “what sort of box should I build?” Or “what woofers should I buy?” And of course, “why did my woofer blow?” Now we’ve addressed woofer failure, both mechanical and thermal, before on the Tech Talk. Today, though, we’re going in depth on the various forms in which thermal failure can manifest itself. Plus, I’m going to use some fancy butter analogies, and how often do you get to hear that?

So, you’re making cookies, and you’ve got a butter popsicle. What’s a baker to do? Well, if you’re like me, you’ve had the brilliant idea to unwrap the stick of butter and pop it in the microwave for a minute. You’ll just watch for when it gets melty, pull it out and let it cool a bit. However, instead of the stick of butter becoming nice and soft like you wanted, you watch like a fool, as the butter paints the inside of the microwave like a Jackson Pollock painting in hot liquid fat. What causes this delicious, buttery murder? Why, water vapor of course. Microwaves have a funny way of heating up things from the inside out, and as a result, the inside of the frozen stick of butter melts and starts to evaporate before the outside has a chance to soften. As the butter heats it releases water vapor which expands and explodes out of the weakest wall of the stick. Voice coils work pretty much the same way… well, minus the radiation. 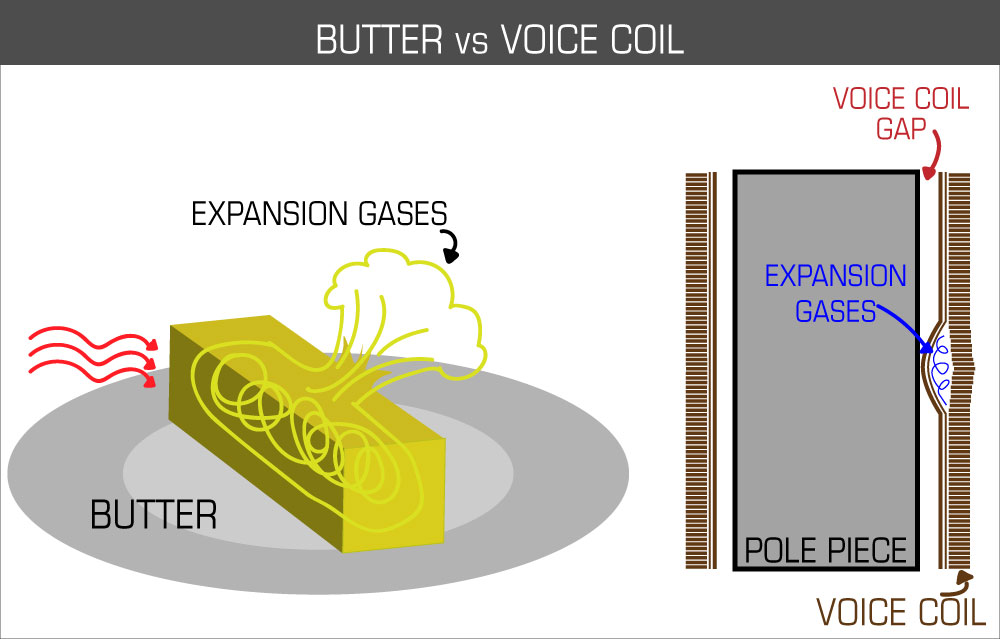 Car audio users have an unwitting propensity to apply insane amounts of power to speakers that aren’t rated for it. Because of this, buttery murder occurs. Mind you, I’m not just talking about a standard, run-of-the-mill dead voice coil either. In this case, we’re referring to a far more annoying form of blowing a woofer: the Rattle. The Rattle is caused by too much power, too fast. Voice coils use various resins to hold their copper and aluminum windings on the former, and just like butter, those resins release gases as they are heated. Because the inside windings of the voice coil are covered on both sides by a former and other windings, the inside layers of the voice coil will heat faster than the outside winding layers. When this happens too quickly, the released gases have to expand somewhere. The gasses can either try to pass through the still hard resins and windings of the outside layers, or through the thin inside layer of the aluminum former. So the gases press against the voice coil former and they create a bubble. Because of the tight tolerances of the woofer’s motor geometry, this bubble is usually large enough to rub on the pole piece, which creates that lovely rattle that we often hear from a “blown,” but working subwoofer. Often times with the Rattle, the voice coil has so much power applied to it, so quickly, that the resins on the outside of the coil don’t even have a chance to discolor.

The Rattle is easy to distinguish from its cousin, the Scrub. The Scrub is a result of mechanical failure, non-linearities and the woofer spider’s inability to keep the voice coil straight up-and-down in the magnetic gap. The Scrub leaves a wide arc of rub marks across the former, whereas the Rattle typically only affects the top of the gas bubble point. 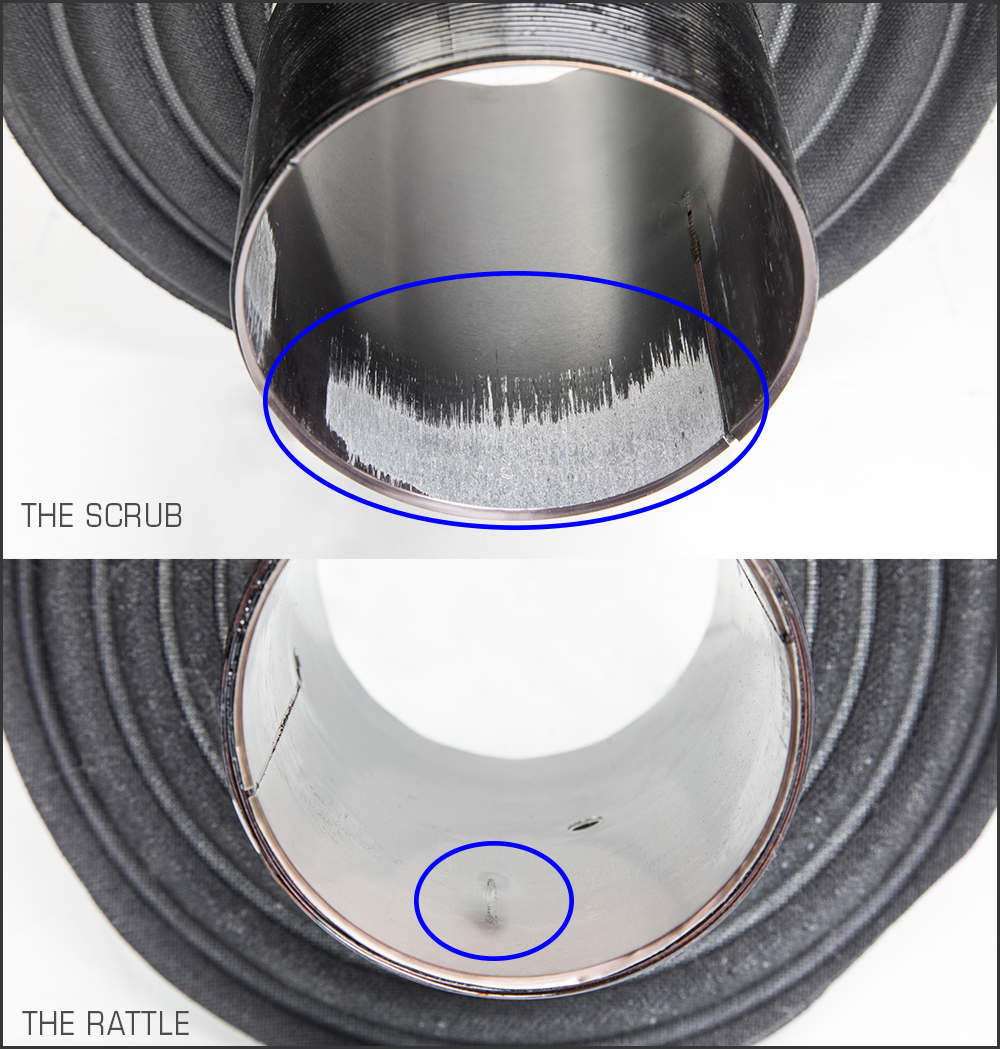 Now back to the butter, because we’re here for the cookies after all, right? After cleaning up my milk fat reenactment of my favorite Dexter scene, I was still short a softened stick of butter. So, grabbing the rest of the pound from the freezer and setting it on the counter, I took one more stick from the package and again put it in the microwave. This time the power was turned down. There was no explosion, but the inside of the stick was still liquefied. Alas, liquefied butter doesn’t work very well for my chocolate chip cookie recipe, and liquefied voice coil resins don’t work well for woofer longevity either.

Voice coils come in two flavors of traditional burn, fast and slow. The Fast Burn is easily characterized by a gradient in the coil. The bottom of the voice coil is black while the top may still be nice a copper color. In the world of roasted coils the Fast Burn is the middle of the pack for too much power for too long. This coil also typically rattles, but this isn’t a former rubbing on the pole piece. Instead, the Fast Burn is when the windings rub and bang against each other. As the resins melt, they do so more evenly than the Rattle. Gases are allowed to escape from the inner layers of the voice coil, you may even notice small resin bubbles form on the gaps between the windings as the resin boils. When the power is decreased even more and played for even longer, we get the classic thermal failure. This is the Slow Burn or as it’s more popularly known, the Slinky. 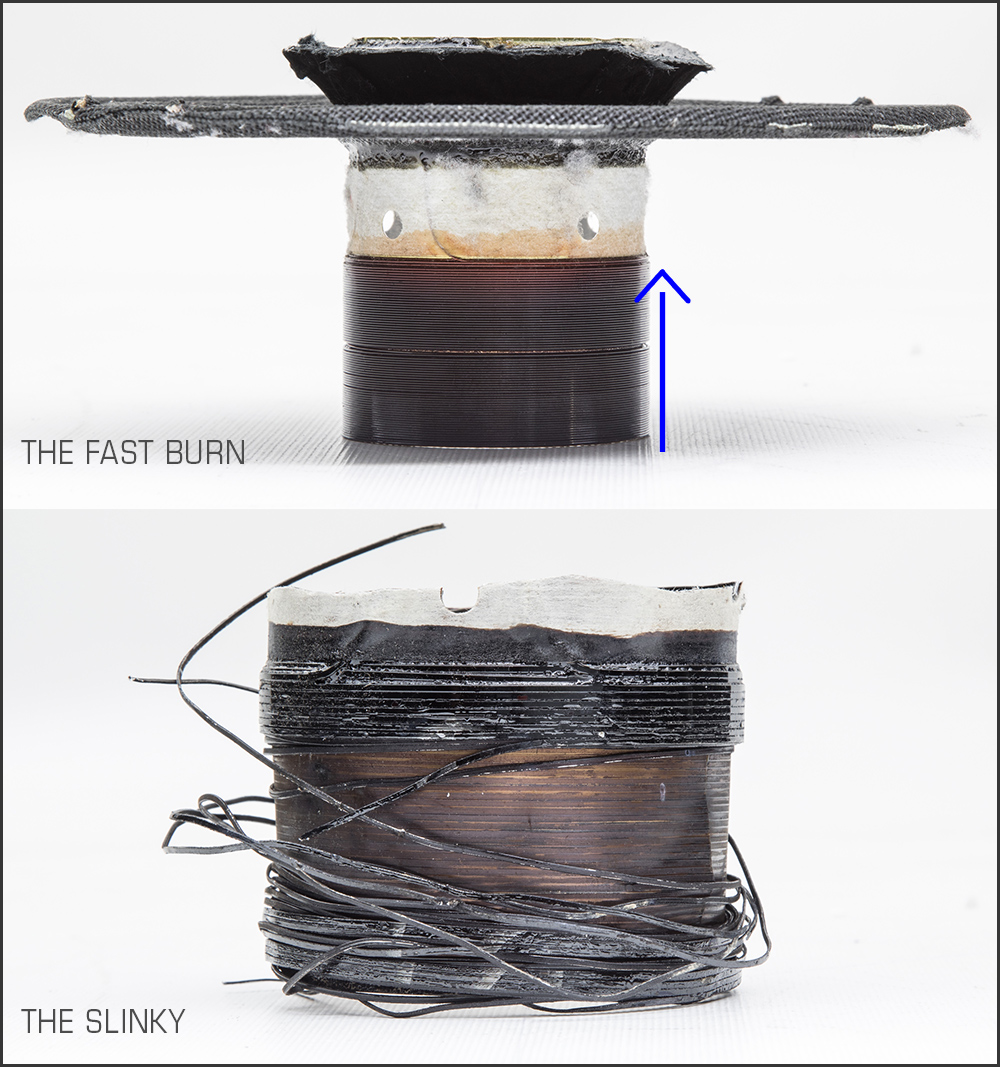 Everybody has seen a slinkied coil. They come in all sorts of shapes and sizes, but no matter how they look, they all have a pile of raw wire that has come free from the former. These coils have cooked for so long that they have cooked off most of the resins that hold the coil together and the windings have started to fall off the former. Once this happens, all hell can break loose. The windings can impede the movement of the rest of the coil, and cause mechanical failures. The wires can also get bent and shear or break apart, causing the coil to short out against the motor. The Slinky is by far the most dangerous to amplifiers, not to mention the Tech who has to pull all that wire out of the magnetic gap if they don’t use gloves. The Slinky, in butter terms, is more like when I take one of the two remaining sticks of butter on the counter and leave it on the windowsill on a hot day for too long and the stick completely loses its form. While this is great for spreading on toast, it’s not very awesome for cookies.

At the end of the day, when you make cookies, the right temperature butter is just a matter of applying the right amount of power (heat). Woofers have the advantage of having that power written right on them. They have a listed RMS for a reason. Audio engineers figured out a long time ago, through countless baking experiments, how much power was the right power.