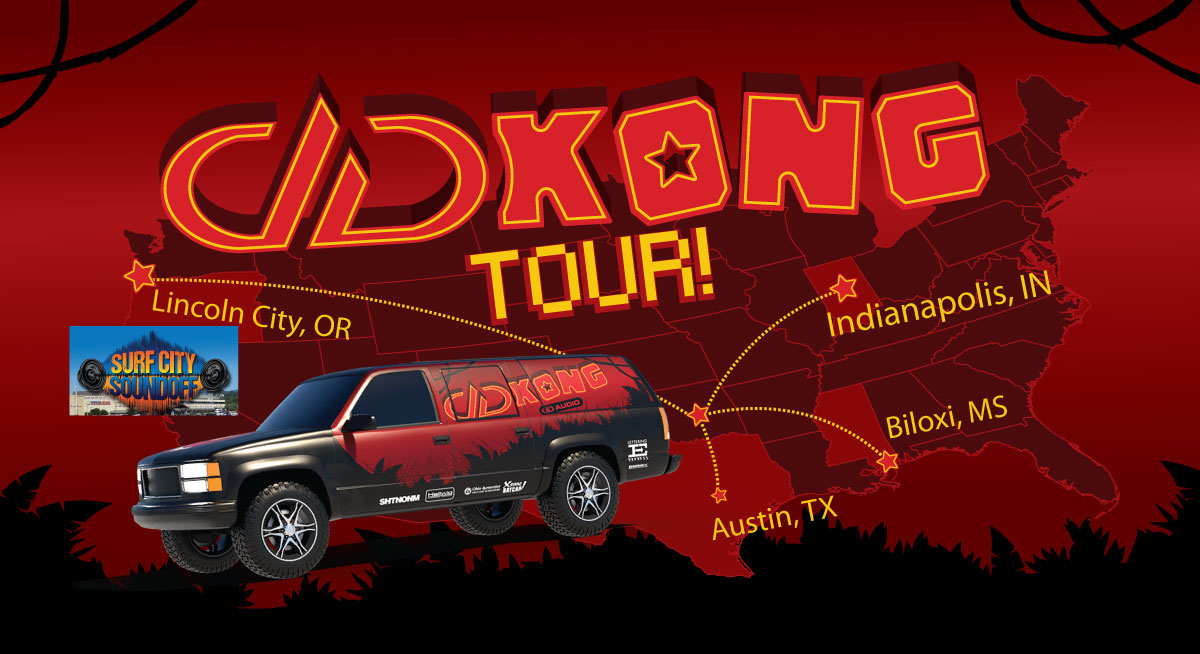 Oklahoma City, OK, August 15, 2018 — As promised, Texas Heat Wave was HOT! With temperatures well over 100 degrees, it was up to the DD Audio Demo Team to blast breezy beats from the DD Kong to cool the place down. Of course, thanks to the USACi audio competition, the spectacular show builds and unique events like the tattoo expo and hydraulic car dance competition, Texas Heat Wave was much more than your typical summer bake-off.

DD Audio would once again like to extend a huge thanks to the local DD Audio dealers, G’s Audio and Audiomaster, who endured the toasty conditions and exhibited alongside the team all weekend long. The short 400 mile trip south provided a chance for Texas native and DD KONG builder Lewis Jackson to visit family and friends while meeting several DD Audio fans and making countless impressions on newcomers to the brand. The DD Audio booth even had a celebrity appearance when rapper Psyph Morrison, stopped by specifically to experience the DD KONG. Lastly, congrats to #DDKONG Photo Contest winners Aaron Herrera, Vance Sanders, and Cris Ruvira – Enjoy your DD Audio Lifestyle Gear!

With Heat Wave behind them, the DD Audio Demo Team are packing up the DD Kong for the cool and distant shores of Lincoln City, Oregon. DD Audio’s first ever appearance at the Chinook Winds Surf City Show is the final leg of the 2018 Summer Tour for the DD Kong. This car, truck and bike show will offer fantastic food, a beer garden, live music, and most notably the Surf City Soundoff where DD Audio is a main sponsor. The Surf City Soundoff is a tribute to and celebration of the loudest and best sounding vehicles the West has to offer and is quickly becoming a who’s who event for the west coast car audio scene. SQ and SPL competition styles sanctioned by dBDRAG and IASCA. Something else you won’t want to miss while attending Surf City Show is the Psyph Morrison performance brought to you by DD Audio. The team is looking forward to providing the good people of the pacific-northwest with DD Kong demos, while also enjoying the cool ocean breeze and Chinook Winds Casino Resort’s many amenities.

Attention Attendees: While the Kong is far from retired, this will be your last chance of the Summer to upload a photo or video on social media of the DD Kong, with the hashtag #DDKONG, for chances to win a limited edition DDKONG/SHTNONM shirt and DD Audio Lifestyle Gear!