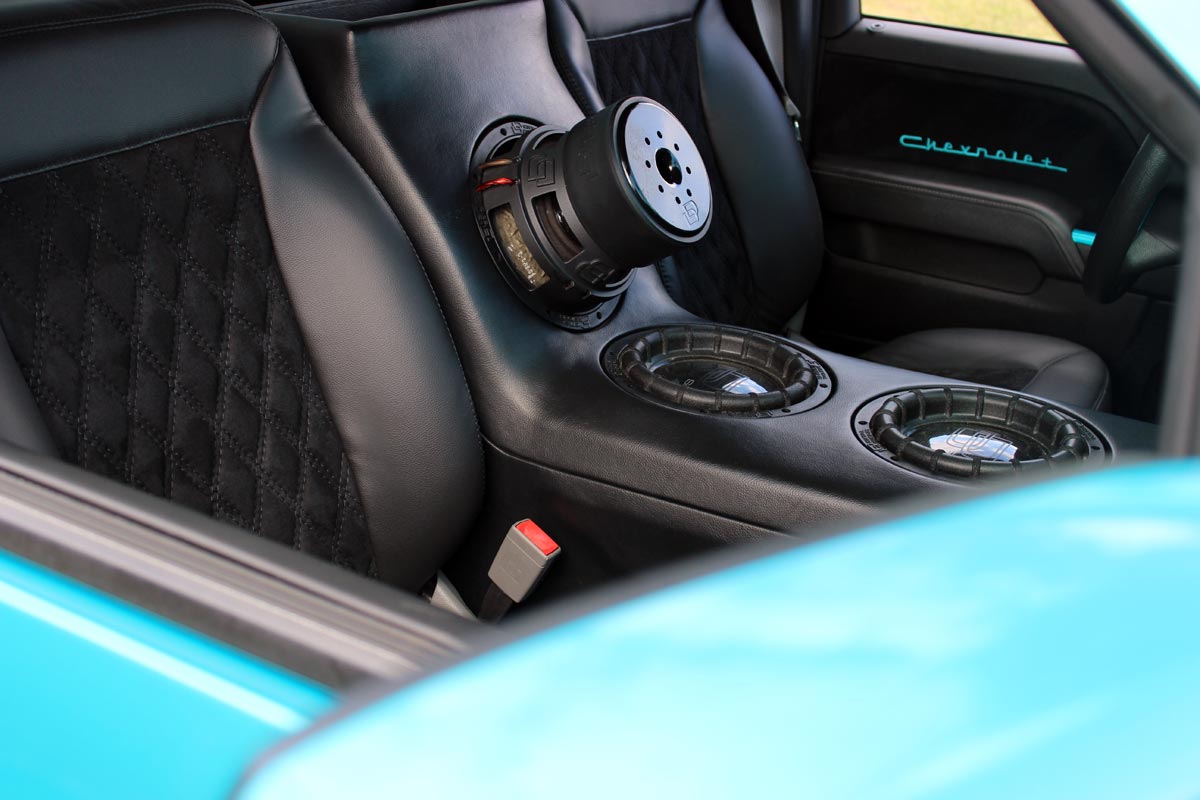 We’ve all seen good custom builds, but it’s the little details that separate the good from great. Such details are abound in this month’s featured build, a 2014 Chevy Silverado WT brought to you by Alex Kilfoyle.

This Silverado had initially gone under the knife for a modest reboot to the previous stereo, but (as most of us bassheads can relate) some projects take on a life of their own. From the Gloss Atomic Teal wrap (that’s right folks, it is a wrap!), to the slick color matched trim on the steering wheel, to the subtle but spectacular door treatments, this work of art is nothing short of a complete reincarnation.

All the amplifier duties are handled with clean DD power, courtesy of the four amps snuggled away in the custom headliner amp rack, wrapped in soft, supple suede. The subs are driven by an M2c and the mids and highs get their shine from a pair of C5d amplifiers, as well as a single C3d. For those that have not heard speakers from our VO lineup, ask anyone who has heard this truck in person, these doors get down! With four VO-M6.5s and three VO-B3s per door, you better believe this truck is heard long before it is seen! Low frequency duties have been entrusted to our venerable 2508 ESP subwoofers (a trio to be exact) in an exquisitely finished center console enclosure. As mentioned, all the details were seen to in this build, including the charging system, consisting of a Mechman 350 amp alternator, and a pair of heavy XS batteries to boot.

Besides all the custom work put into the seats, doors, and stereo, there are a host of other upgrades to the truck, all with no help from sponsors (he is looking, folks, so don’t be shy!). Besides the aforementioned wrap, there was a 4”/6” drop kit applied for that perfect stance on those 24” Dub Ballers, a cold air and exhaust kit for that sound you want from a truck, custom grille and headlights, as well a c-notch and mini-tub to accommodate the feet.

It seems a no-brainer that Alex is clearly a DD fan, and after speaking with him, it becomes even more than that. His father is a long time installer with a couple of decades of experience under his belt. That is where Alex first became aware of our brand, and once he built his first DD setup, he was hooked. It was an easy decision which way to go for gear for this iteration of the truck. While Alex agrees that some projects are never really finished, he and his father really reached every goal they set for the build in this Silverado. For the future, he is still having to decide the toss up between building out the motor for more power, or bagging the truck and dialing in the suspension (though I think that tub and c-notch tells us which way they are leaning.. ha!).

In closing I feel it is important to note that Alex gives the credit for this build not to himself, but to his father – the driving force behind this build. Alex sums it up beautifully:

We built this truck together, but most of the design and leg work came from him. I could throw money at this truck all day, but without his vision and skill none of it would be possible.