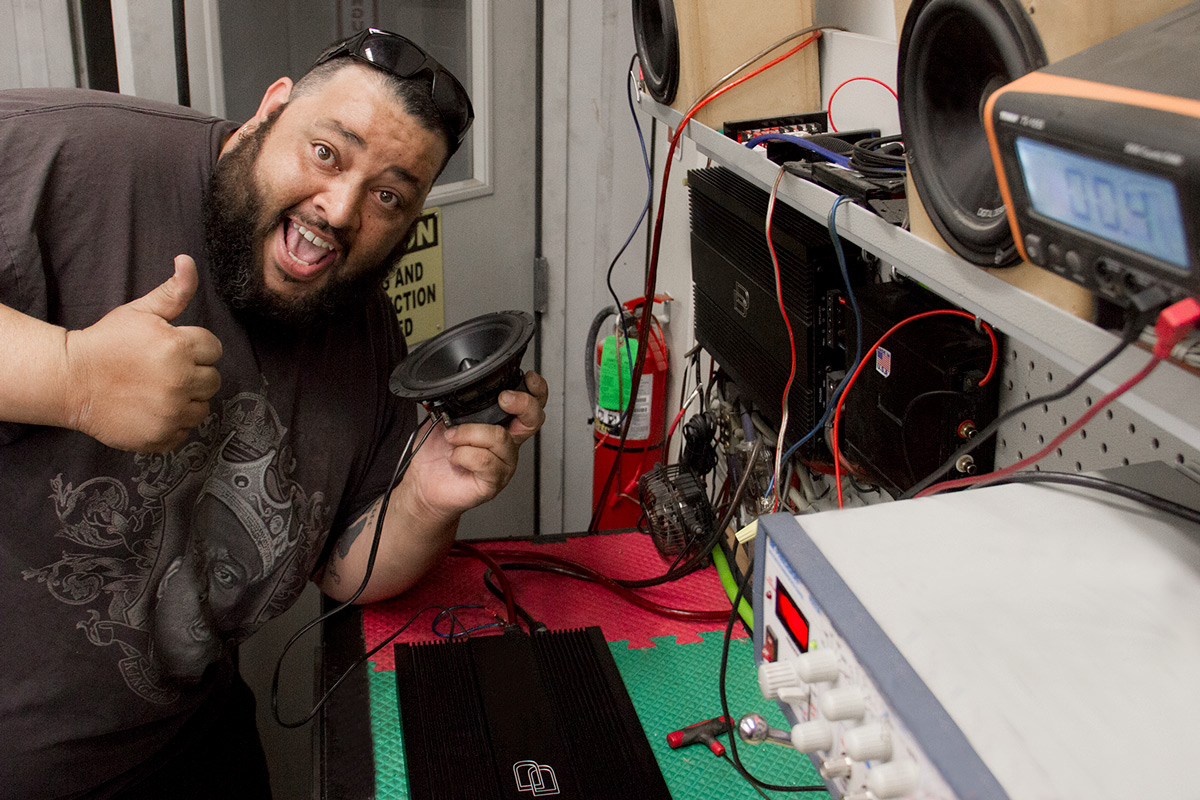 Originally published in 2017, this relavent Tech Talk shows us how the All-Star Installers bench test amps!

“I hooked everything up right, but it’s not working.”
-Everyone who thinks they know what they’re doing.

We’ve all heard it. Heck, some of us at some point in our lives have probably said it. The reason you’re hearing it now is one of two things; the amp is broken, or the person troubleshooting the amp has overlooked something. You’ve checked the fuses, the radio is on and playing, you’re pretty sure the speakers are wired to the amp correctly… what could it be? Is the amp bad? Well luckily for you, you’re an avid Tech Talk reader, you’ve just read August’s article (2017), and you’ve just finished building your test bench! Let’s put it to use!

Like we mentioned last month, a test bench is comprised of a power supply, a source unit, a couple pieces of test equipment, and some speakers. The test bench is a functioning audio system that can be quickly modified to allow a questionable piece of equipment to be added in line to verify if it is working or broken. In this case, we’re interested in amps. Amplifiers can be one of the most troublesome pieces in a system to troubleshoot. They’re centrally located in a system, can be affected by any part of the install, and don’t typically have a way to show exactly what’s wrong with them beyond a red “Protect” light.

For this article, we’re going to assume the amplifier that was pulled out of the install was not smoking, smelly, or on fire… if that’s the case, the test bench is a little unnecessary. We’re also going to assume that the vehicle was troubleshot for silly things like: a blown fuse, a loose ground, grounded speaker leads, etc.

So the first step is to wire the amp up to a +12 Volt DC power source, a ground source, and a remote source (in most cases this can just be a wire ran from the +12 VDC input to the remote for testing purposes). Nothing else needs to be connected to the amp; no speaker wire, no RCA’s, no bass knob, nothing. What does the amp do? Does it go straight into protect, or does it operate normally? If it’s in normal operation mode and it was in protect in the install, odds are there is something incorrect with the install. If the amp goes straight into protect without any inputs beyond power, ground, and remote, the amp has been damaged and it will need to be serviced.

Now, If the amplifier does power on when it’s wired to a battery, signal devices should start being wired to the amp. Start by turning the amp off, attaching RCA’s from your test bench’s source unit to the amplifier, turning the amp back on, and playing some material. Music, Sine waves, or signal sweeps are all acceptable. Run the volume on the source unit up to the amplifier’s maximum input level if your source unit is capable of it. Many amps will have their input voltage range listed on their gain pots, the amp does not, refer to its user manual for input ranges. In a lot of cases, if the amp is experiencing issues with it’s pre-amp or audio driver and it’s not enough to immediately kick the amp into protect on power-up, plugging in RCA’s and playing signal will allow you to trigger the amplifier’s protection circuitry.

If the amp has RCA’s plugged in with signal playing into the amp and it is still functioning, it’s time to start wiring speakers to the amp. If it’s a sub amp, wiring a sub to the amp is best. Conversely if the amp is a full-ranged multi-channel amp, a full range speaker will generally work best for testing. Be sure that the gain is set appropriately for the input voltage coming from your source unit, and that the crossover filters on the amp are not gated to prevent output (HPF set higher than the LPF). Wire your speaker/sub to each channel to verify output from each channel. If you’re on a sub amp, you’ll obviously only have 1 channel to test. However, on multichannel amps with bridging capabilities, be sure to test that the speaker plays correctly in bridged wiring configurations as well. It is important to consider specialty functions of the amp at this point. If the amp has a main/link/strap switch, be sure to verify that the amp is in main mode, or there will be no output. If the amp has a summing function or an input selector switch, make sure that there is a way to create output for the channel you’re testing. This may mean having to change RCA locations for the amp if you only have 1 pair to test with on a 4 channel amplifier. All stereo output pairs should have the same relative volume from one to the other. If a channel pair has diminished output or no output on one of the 2 channels, verify that the source unit is not unbalanced, then switch the input RCA’s from left to right and check the channel outputs again. If the output discrepancy should not follow the RCA switch, the same lack or absence of output should remain on the same channel. This will mean that the amplifier needs to be sent in for service.

In the event that the amplifier functions properly but creates a strange noise (popping, whistling, whines, squeals, etc) while in the install, be sure to listen for these while testing the various output channels. Squeals and whines can be created by grounding issues in the install as well as in the amp. The only way to isolate these is by putting the amp on the test bench to see if the noise is present there as well. If they are, the amp likely needs to be serviced. Another common noise article that can be created by amps is a popping or thumping. This is most common on sub amps. This can be for a variety of reasons, most of them being grounding related (usually on the signal path), it can also be vibration related. In many installs where the amplifier is mounted to the subwoofer enclosure the amp can be damaged by the powerful vibrations created by the flex in the enclosure or by the high pressure sound waves created by the subwoofers. Regardless of the cause of vibration based damage, the issue can be replicated by hitting the amplifier. Generally a light slap on the amp chassis with an open or closed hand will be enough to replicate the noise.

If the issues that are experienced in the install cannot be replicated on the test bench, it is time to go back to the install and re-examine it. It can be frustrating to have an issue with an install and not know what is causing the issue. However it is far better to test an amp that is acting up and find out that there is nothing wrong with it, than to send the amp in for repair and be without the amp during its time in shipping to and from the repair facility.

Check out our full line of amplifiers.