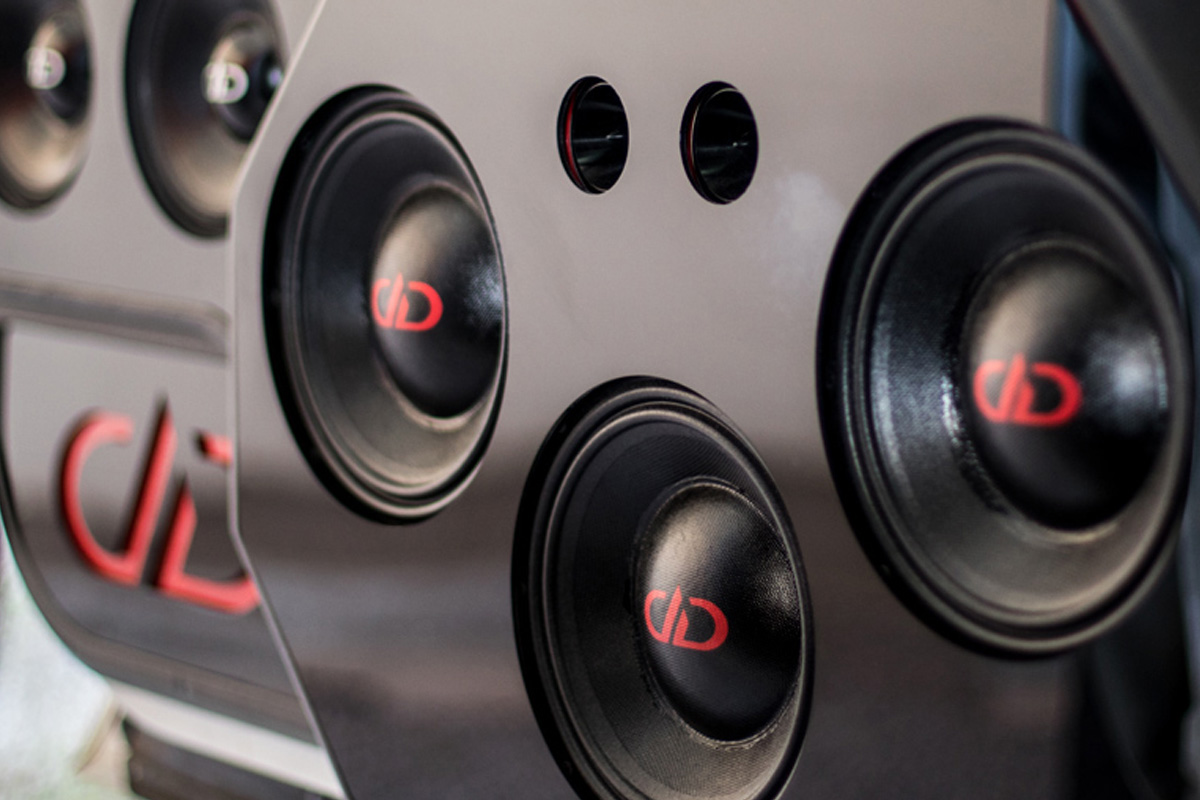 In Part One we took a look at how to set-up a fully active network of 3-way PA speakers and some of the necessary design considerations. Here in Part Two we’re continuing on that same path and getting more in depth on the science of enclosure building. Be sure to read part one, as this picks up right where that left off.

So, if we’re going to build an enclosure in our doors for our midrange speakers, how big do they need to be? Mid-bass is generally accepted to be from about 60-80 Hz on up to about 250 Hz. From 250 Hz on up to around 4 kHz is our mid-range. 250 Hz makes for a nice target point for our mid-range to be built for. All VO-W can play very comfortably up to 250 Hz and all VO-M and VO-MN can very easily play down to 250 Hz. Mid-range is where most of our musical information comes from in a given track so we want to make sure we really nail it.

A sealed enclosure is very simple to construct and it allows us to tune the resonance of our system (the enclosure and the driver/s) right around our target frequency range. The simplest approach is to build an enclosure into the door and simply play tone sweeps through the mid-range to find the point at which the drivers physically move the least. This point will be the system resonance and it’s the point at which we’ll want to set our high-pass crossover at for our mid-range. However, if we want to be more scientific about it we’ll need 3 things.

These specs can all be found on the DD Audio website. Sealed enclosure’s work off a target spec called Qtc. Qtc is the total control (electrical and mechanical) of a driver, plus the enclosure it’s in. In most applications Qtc is the variable that is used to design your sealed enclosure. A Qtc of .6 to 1.0 is an acceptable range for driver performance in most applications. Higher Qtc values shrink the enclosure size, but they also increase the driver’s cut-off frequency, or how low an enclosure and speaker combo can play. In our application, however we have a target 250 Hz. So we’ll be designing off that as our primary design parameter.

Below, the DD Audio wizards have included a calculator to help with the design process. Simply find the VO-M/MN on the website that you’d like to use for your midrange and insert the Fs, Vas (in Litres), and Qts values into the calculator. If you’ll be using more than one of the same mid-range drivers in a single enclosure, be sure to multiply the Vas by the number of driver’s you’ll be using. Once you’ve entered the relevant data, the table below the calculator will populate. You’ll want to use the enclosure size that is closest to the 250 Hz tuning target without exceeding a Qtc of 1.0.

This calculator can also be used to tune a sealed enclosure for the VO-W mid-bass drivers. Remember though, you’ll want to tune crossover to the system resonance of the woofers in their enclosures. Tuning at resonance for a sealed enclosure will allow you to drive the speakers harder and get more output from your doors or system. The system resonance will never be below the Fs of the driver in a sealed enclosure, so look at using a larger driver with a lower Fs if the driver you’re designing with doesn’t fit the bill. When addressing low frequency play in a big loud set-up, understand that it takes big drivers to play big mid-bass notes. There’s a reason professional stage set-ups often use stacks of 12”, 15”, and 18” drivers to replicate mid-bass frequencies with the same force as the rest of the speakers. There aren’t many vehicles that can support something like a VO-W15 in their doors so expect to be crossing your mid-bass over around 100-120 Hz. Playing into an open door will allow us to cross the driver over lower but again, as it was said, the driver will have less mechanical power handling.

Many of you may have been asking about additional damping (ie stuffing) for your sealed enclosures. This is definitely an option and will be much more important for your mid-bass drivers than the mid-range drivers. Stuffing, like polyfill, dacron, or cotton stuffing, can simulate and increase in enclosure volume by 15-25%. There are many calculators online that can tell you how much stuffing will affect the simulated enclosure size. Unfortunately it’s very difficult to predict exactly how much stuffing in a space accurately represents the amount of stuffing the calculator is defining. Is it 1 handful? Maybe a pound? The easiest way to use stuffing is like we talked about toward the beginning of this article. Once your enclosure is complete, add stuffing and test the driver using frequency sweeps. The frequency at which the driver moved the least will be your tuning frequency. Be mindful, even with stuffing, the enclosure tuning will never be able to drop below the Fs of the speaker/s being used.

Some of you T/S Parameter zealots are screaming at this article right now, saying that the Qts and the EBP of most of these drivers clearly defines them as ported drivers! You’re right! However, this article is about practical design. Since we’re already making concessions for the mid-bass drivers being free-air due to the large space required for them, it’s equally important that we make concessions for the potentially very challenging, and largely unnecessary, task of making a port for our mid-range or mid-bass drivers in a space, like a car door, where even a sealed chamber can be difficult. Now, if you’re building out the rear of a vehicle and have plenty of space for ported enclosures and you’d like some help designing ported enclosures, be sure to give DD Audio Tech Support a call and we’ll be happy to help you out.