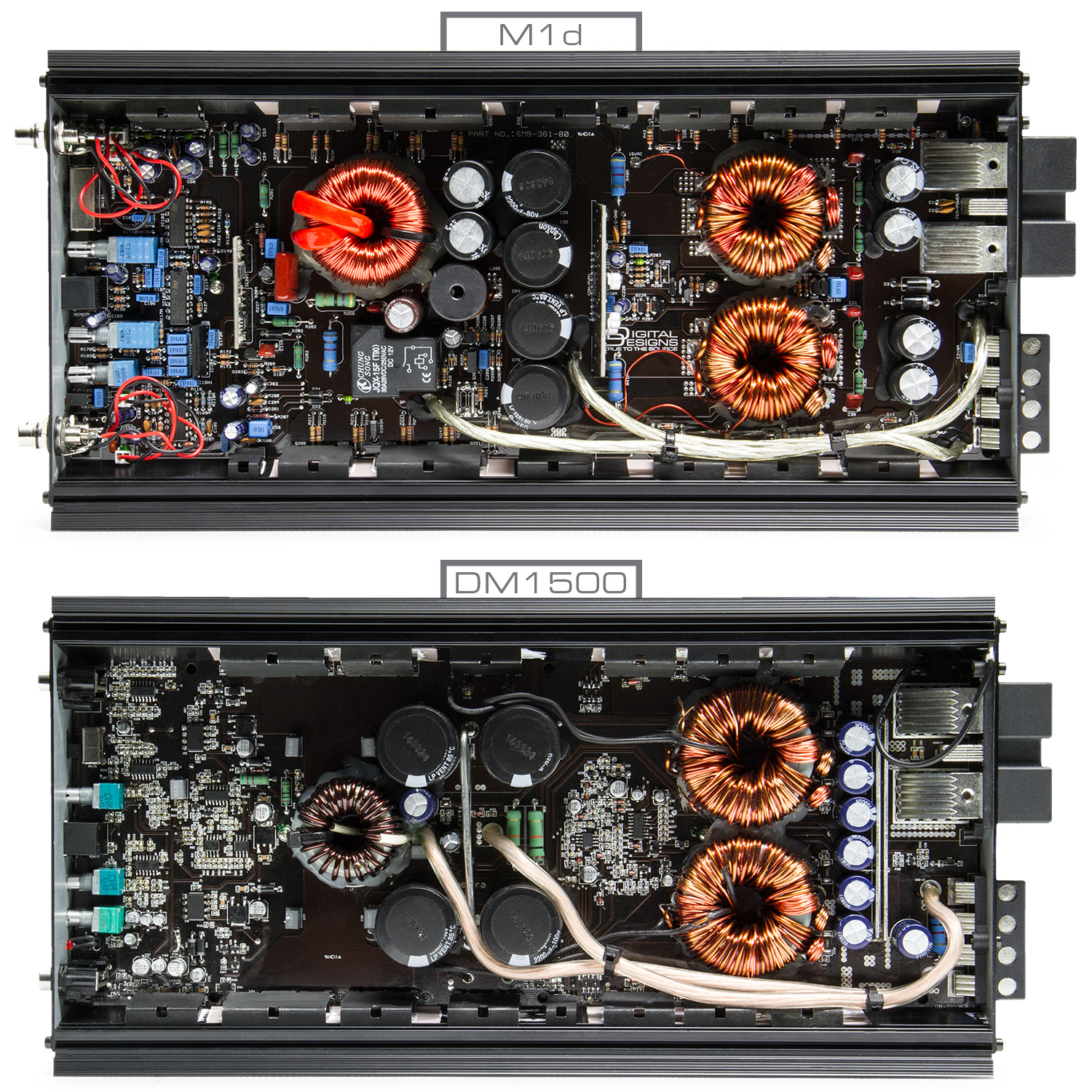 When you consider buying a product and both are equal, you’ll always buy the cheaper one, right? If they both look the same, perform the same task, and have the same level of support, why would you spend the extra money on a more expensive product? Take breakfast cereals – do you want the name brand puffed rice cereal or the store brand knock off cereal? Since one is obviously cheaper than the other and there is no discernible difference to the average consumer… odds are, the big bag of knock-off Rice Crispers is what’s going to be in your cupboard.

Alas, this is not the same easy task with electronics. Two amplifiers in the 1500 watt range, one which costs $400 and another that costs $600. Surely the only correct choice is to buy the cheaper amp, right? They both make about the same power. They’re both the about the same size. So, why would you spend the extra scratch? Funny enough, we just so happen to have 2 such amplifiers that fit this description, the M1d and the new DM1500.

When comparing similar electronics, obvious things like power cannot be the only deciding factor at this point, since much of what we will find to be different are small things that equate to a better overall product.

The M1d can muster an extra 117 watts at 14.4v at a 1 ohm resistive load over the DM1500, while notable, it still doesn’t explain the price discrepancy. This comes from design features that will make the product sound better, last longer and protect your investment. A lot of these differences have little to do with the actual power supply or power amplifier. More often the differences are in support circuits.

When looking into these two amps, one of the most noticeable features is the big giant toroid just off center of the board on the M1d. A similar, but much more lightly wound transformer can be found on the DM1500. This component is part of what’s called the LC circuit, or RLC circuit in the case of the M1d. Often called a tank circuit, the LC filters out the switching sounds of the switching circuitry in D-class amps which creates all the power in both amplifiers. These filters work much like your crossovers in the amp, only at much higher power levels. Because the RLC is a higher order circuit, it can filter the switchings sounds of the amp at a higher frequency due to it’s steeper slope which allows the amp to reproduce its effective bandwidth more linearly. Due to this feature M1d users will notice a more full sounding bass when compared to the DM1500.

Directly next to the RLC circuit, potential M series owners will notice a mysterious black box that is absent from the DM1500. This is an output relay. It is controlled by the PWM board that houses the amps protection circuitry. Not only does this relay come on after the amp has powered up to eliminate any potential ‘turn-on pop’ in the amplifier, it also doubles as a DC offset protection point that can de-couple the amplifier from the speakers at a moment’s notice should the subs suddenly ground or should the amplifier suddenly suffer internal damage. Since the DM amplifiers do not have this feature they rely on their LC circuit to buffer the amp from the speakers. Anyone who has seen an amplifier turn on and immediately push a woofer to full excursion or suck it in, has seen an amplifier with a DC offset issue that does not have a functioning protection relay.

Next to the power terminals on the M1d there are two rarely needed but infinitely valuable parts. These parts are diodes that sacrificially protect the amplifier in the event that it is wired backwards. If this happens on an M1d, the diodes will break and protect the amplifier. If the diodes break, it’s a few cents in parts plus labor. Should a non-diode protected amp suffer the same consequences, the repairs can be quite costly or even render the amplifier non-repairable.

You’ll also notice the M1d contains two vertical boards mounted to the main board. One is the audio driver and the other is the PWM. These boards control the amp’s power supply and the protection circuitry. The DM1500 also contains these parts but, they are surface mounted onto the main board. Not only is surface mounting a more streamlined design approach, it can result in significant manufacturing cost savings, which is of course reflected in the final cost of the amplifier. The downfall of this is the lack of serviceability. In the event the amplifier is damaged from under voltage or is over-driven, often times the MOSFET’s, which perform the switching in the amp, fuse together and and send full rail voltage directly into the audio driver. If you have unfiltered rail voltage going into the audio driver… you’re going to have a bad time. The expense of repair isn’t just the MOSFET’s that blow but also lots of tiny parts in the audio driver. On the surface mounted drivers of the DM1500 this means lots of time hunting down the affected parts, most of which are about the size of fine gravel. Conversely the M1d has all its tiny hard to replace components on an easily replaceable board. Many of the other segments on the M1d utilize larger, more robust parts which are easier to replace in the event of damage, unlike the DM1500 which opt for their more streamlined surface mount counterparts.

Looking to the RCA ends also yields some advantages. The DM1500 has some very conventional board mounted RCA busses, whereas the M1d sports the more rugged panel mounted Tiffany connections. In an install which the amplifier may be installed under the seat and might catch the errant foot or for an install that uses extremely tight fitting RCA plugs, both situations can take advantage of Tiffany connections. The Tiffany connections have their shields mounted through a polymer isolator that is directly connected to the amp end plate. The endplate connection will hold up much better than something that is mounted to the circuit board. Tiffany’s can also be more readily replaced than something that must be unsoldered from the board.

Now, this isn’t meant to gang up on the DM1500. For the average consumer, the DM1500 does exactly what it is designed to do; produce a heap of power without using a heap of our pocketbooks. It is constructed with an entry-level bass enthusiast in mind; with low loss transformers, high powered FET’s, a robust LC circuit, a suite of pre-amp features that can suit the needs of most users; even some competition level users, and a sturdy bass knob with clipping indication. If however, you’re someone who needs an amp with uncompromising quality and rugged dependability, the M1d may be more your style. Regardless of whether your needs necessitate the budget or the beast, you can guarantee that both the DD Audio DM1500 and M1d will provide every ounce of power they claim, and potentially more. Both amps will bestow upon you, years of ground shaking bass and soul crushing beats to please your subsonically inclined ear-holes.