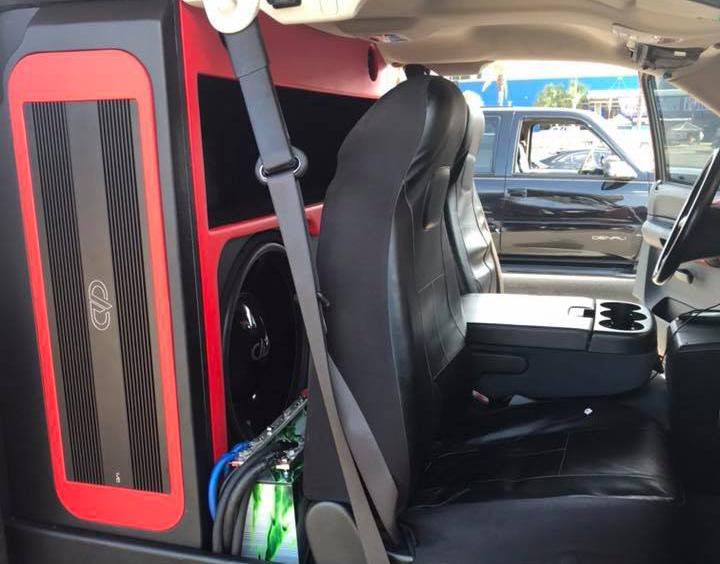 As we have travelled across the nation attending shows with the DD Kong project, we have been privileged to see multitudes of DD Audio builds, ranging from simple “deck and four” setups utilizing our entry level coaxial midranges, to all out, no holds barred, seating-comfort-be-damned, dedicated bass only machines of war! Few of them have the right to belong to both groups, but there always exists an exception to the rule. If you have spent any time around the car audio community, I would bet you have heard the long-standing adage of “loud ain’t pretty”. Some good folks like Fabian Nichols, owner of this Silverado, have been able to prove that is not always the case!

Dotted throughout the interior and covering a significant portion of the exterior of this truck is every DD Audio sticker imaginable. The lavish adornment of DD Audio gear and goodies inside is very much the same way. The obvious standouts are the beastly pair of 9921 subwoofers dominating the cabin and the expertly trimmed M5 amplifiers that bookend them. As Fabian had just a smidge of free space above the wall, the obvious move was to stealthily sneak a set of EX4 coaxials up top to help fill the cab with enough vocals to rise to the challenge put forth by the low end transducers. Not to be outdone, the rest of the cab gets filled with that sweet DD Audio sound from a set of EX5.25 mids, a pair of DX6.5 mids, a complementary set of  VO-B1 tweeters, and even a set of DX6x9 mids in a custom center console, powered by our venerable C5d (discontinued – current model is C4.100 amplifier).

Affectionately referred to as “21 Bumpstreet”, this build shows that just because a build is loud, one shouldn’t simply forego the aesthetics. It also shows that having the beauty work finished shouldn’t always prevent one from improving on a build’s performance. It is possible to enhance your setup without sacrificing the sharp look you’ve already achieved. For those who saw this build at Scraping The Coast, you may notice the modifications to the port that are new, yet very neatly employed. Fabian beams that the setup now plays with authority down to the mid 20’s (frequency wise) and with all that available power, we bet it is something to witness! This will be a build to look for, potentially at a show near you this season!