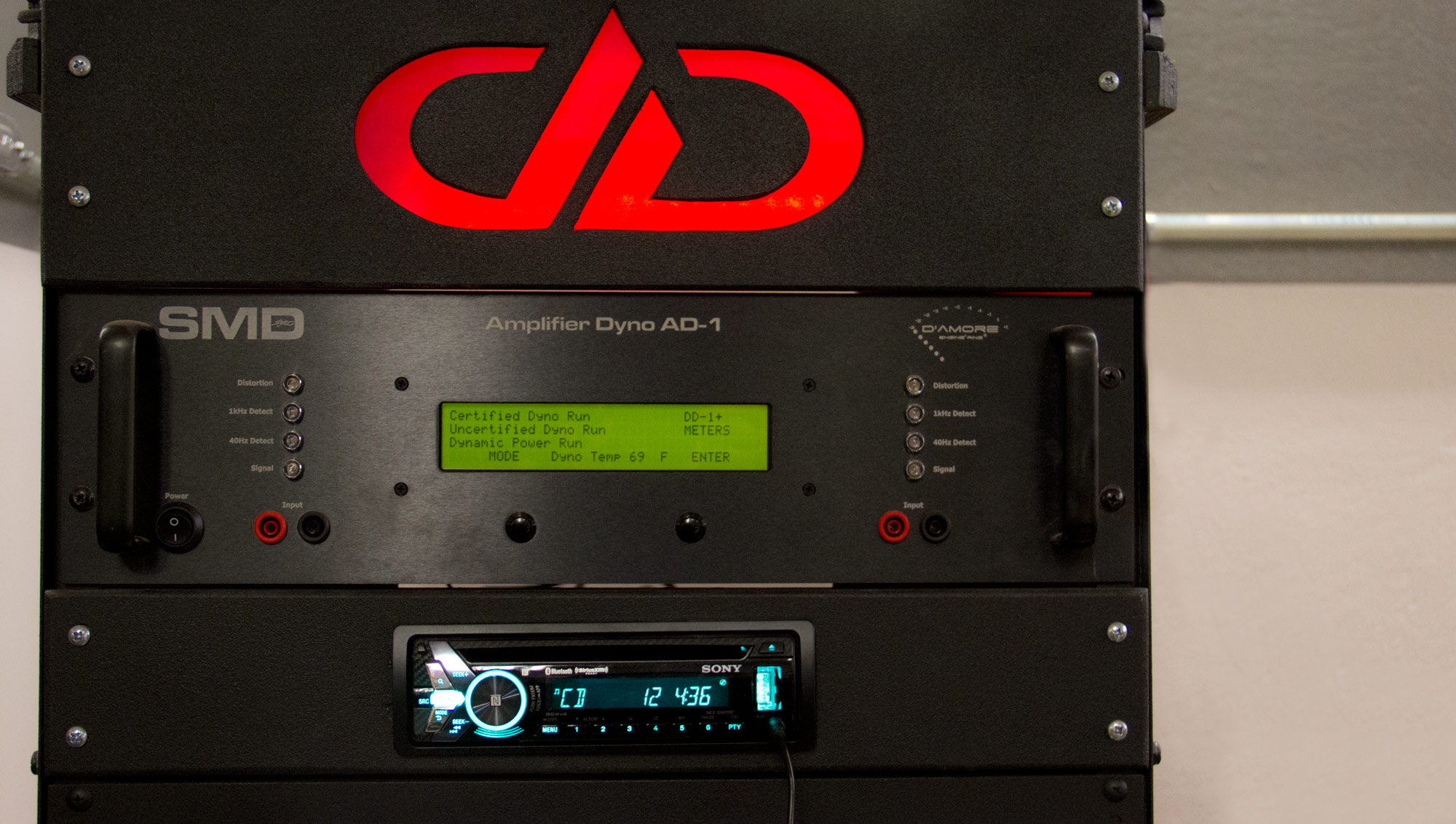 Triple 4 Volt pre-outs, the pre-amp which all others are to be judged by. Pioneer, Kenwood, JVC, most company’s upper echelon radios all have them. If you’re into the audiophile lifestyle, you may have something even better. These days some manufacturers are even making a triple 5.0v pre-out radio, but how much of that acclaimed voltage are you really seeing?

We’ve selected one of our favorite radios in the DD R&D room to put to the test, the Sony MEX-GS610BT. This radio touts a burly triple 5v pre-out, but for the sake of keeping this as something easily digestible, we’ll only be focusing on the Sub output with all boosts or extra sound features off (unless it’s mentioned otherwise). The radio has an adjustable volume from 0 to 50. The test track we’ll be applying will be a 0 dB 40 Hz to allow for the most pure representation of signal input we can. Ultimately the goal is to gain the most pre-out voltage from the radio without creating a clipped signal. To visualize this we’re using a very budget friendly DSO Nano V3 pocket oscilloscope.

The first step is to determine how much voltage we can get from the radio. Will it even give us 5.0 Vac?

As you can see, both the CD and USB sources are more than capable of producing the voltage that Sony claims. The Sony radio does clip at 50 on the volume, however, at 49 the USB checks in at 5.03v and the CD comes in at a whopping 5.163v of undistorted signal.

Upon further examination we can see that the AUX and BT have significantly less output voltage than their fixed source media counterparts. Both, the BT and AUX rely on an external device, in this case, an iPhone 6 with the same 0 dB 40 hz track. The reason we’re seeing such a dramatic drop in response is because every phone, tablet, or external source in general is going to have different output levels. Sony, much like every other stereo manufacturer knows this and has included a feature called Signal Level Adjustment (SLA). The SLA allows us to compensate for the poor output from devices like the iPhone used. The AUX source can apply an 18 dB signal boost, and the BT source can apply a 6 dB signal boost.

Both of these sources see a significant increase in signal output from their RCA’s. We can also see that even with the boosts in full effect the signal remains unclipped as long as the iPhone is not clipping. Some phones or other devices may have stronger outputs, so it should be noted that you may not always need to apply the full SLA limit to achieve a matching voltage to the CD and USB sources. Once these unclipped boosts have been applied, a careful re-examination of the source outputs can be made.

At this point it’s pretty safe to say that the Sony is capable of achieving its 5v claim on most sources. Anything above 5v of signal does seem to clip, but Sony also didn’t claim the radio to be a 5.5v or 6v head unit.

So what does this mean? Well, it means that if you’re running a fully amplified set-up in your car, that you’ve got enough voltage to barely need to move the gains on most amps. Which is great, but what if we’re not using a speaker amp though? What if you just bought your radio for the features? BT, USB, AUX — what more could you need, right? If you’re using the radio’s internal amp that makes a hilarious claim of 50 watts x 4, you’ll usually be woefully disappointed. Most head-units can muster about 12 watts a channel if we’re being generous. In this analysis, we’re just going to be looking at the output voltage from the speaker outputs. The MEX-GS610BT can put out a little under 12 Volts AC with the volume all the way up. However, the signal on the O-scope is completely clipped. Anyone who uses the radio’s speaker outputs at this level is going to be burning up speakers left and right! It isn’t until the volume is reduced to 35 where the O-scope can show us a nice rounded waveform once again.

So if the Maximum unclipped volume from the speaker outputs comes as early as 35 (70%) on the volume, what kind of pre-amp voltage do we get? If we’re looking at our sources from earlier, that means that the strongest source (the CD) is only going to be able to provide 1.025 volts of signal. That’s a pretty far cry from the beefy 5 volts we were looking at earlier. Well, there’s one feature that can try and reclaim all that lost voltage. It’s a scary one too. Subwoofer Boost! Sub Boost has been the culprit of many a blown speaker over the years and it’s no different here. When used correctly, the Boost in the radio can help us get back some of the voltage we were promised. If used incorrectly, it will heavily clip the radio outputs and go straight into the amplifier. The amplifier will amplify the clipped signal being fed to it and you’ll be needing a new Subwoofer in no time. The Sony radio can apply up to 10 dB of subwoofer boost. This can equate to about a 300% increase in voltage. When applied to our CD source, the Sony radio now produces 5.04 volts at 39 on the volume rather than all the way up at 49 like before. When we match this up to our unclipped speaker output, we can still muster an unclipped 3.2 volt output from the sub RCA, which is the most that this radio could produce on any source from the point that the speaker outputs clipped.

This GS model Sony is a great example of how difficult it can be to get real voltage from your radio’s pre-amp. If you’re buying a GS model, you may have a nice 4 channel amp to support it and this pre-amp voltage issue may not be a problem. If you are buying a cheaper radio though, this can get quite challenging. Let’s say you only want to buy a $100 radio. The DD R&D also tested a Sony MEX-N5100BT and a Kenwood KDC-168u, both of which claim a 2.5 volt sub pre-out. Surprisingly, both units were able to produce close to their rated voltages at 2.1 volts. Both units do suffer from the same insufficient internal amplifiers that clip before Maximum volume. The Sony can produce a clean speaker output up to volume 37 out of 40. The Kenwood’s volume goes up to 35, but clips at 28. Both of these radios can only muster a meager .45 volts of pre-amp voltage at these volumes. When the Sub boost feature is applied, the Sony radio rises to 1.5 volts clean and the Kenwood, amazingly can achieve just under 2.4 volts before it clips.

At this point you’re probably asking yourself, why does DD care about my radio voltage? Well, faithful Tech Talk readers, DD Audio cares because gain pots care. How many of you have heard, “But I only had the gain turned up halfway?” If your sweet, new Sony GS radio is producing 3.2 volts and you have your gain up halfway on an amp, there is a good possibility that you’re distorting the outputs of your amp and sending that directly into your subwoofer. Of course, this depends on a lot on the type of gain pot that is in your amplifier. The opposite can also be true. If you’re using a radio like the less expensive Kenwood or Sony we tested earlier and only be getting half a volt of output, you could be turning up your gain half way and never seeing the true potential output of your amplifier. The only way to be absolutely sure that you have an unclipped signal to your sub is to actually test the outputs of your amplifier with an O-scope with the radio at its maximum clean output level.