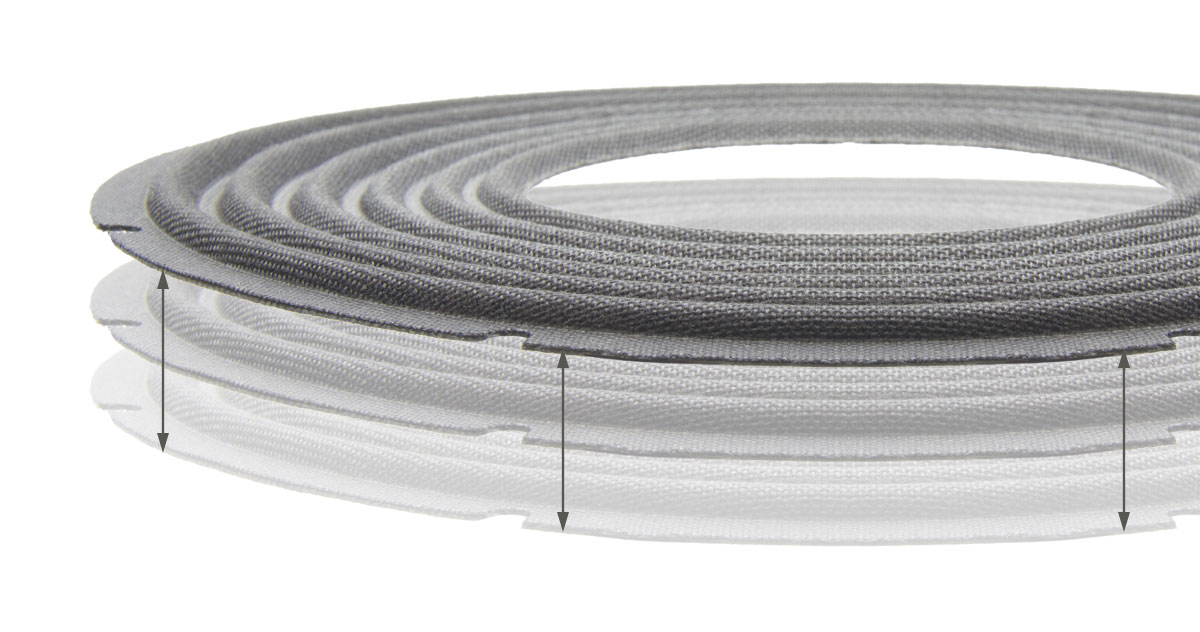 This month’s tech question comes from Derek Walls of Virginia, he asks,

“Can you explain the suspension options Soft, Standard, and Extra Stiff; and how they apply to box design, output, and inductance?”

When you’re looking at DD subs for your next sound upgrade, it can be a little intimidating to see all the options that are available. Cosmetic options are easier to pick, like the logo color or powder coat color for the basket. What about the other important performance features, like the type of suspension? DD offers three distinct suspension set-ups to choose from: Hi-Def Tuned (Soft Suspension), Power Tuned (Standard Suspension) and Extra Stiff Suspension.

Hi-Def (Soft Suspension) – Designed for systems where fidelity is the focus, and everyday listening will be done primarily inside the car. Hi-Def subs offer the perfect mix of control and efficiency.

The Hi-Def Suspension or Soft Suspension, is for subs that will spend their days in compact vented or sealed alignments. These subs appeal to users who concern themselves with TS parameters. Hi-Def subs certainly look better on paper with their higher Q values and lower FS values. Being of higher compliance it is important to note that RMS power handling and mechanical (peak) power handling are going to be much closer to each other with these subs because it requires so much less power to propel the drivers to XMax and even XMech. The low FS of the driver becomes very appealing in sealed alignments where the resonance of the sealed chamber can be aided by the resonance of the driver, allowing the system to more faithfully reproduce low-frequency play without the use of a port.

Anyone who has used a DD sub is probably familiar with the Power Tuned or Standard suspension. This level of compliance has been a hallmark of the DD sub since the 90’s. The low compliance of the Power Tuned spiders allows the sub to maintain a great deal of control in the large vented enclosures they’re intended to operate in. When you consider the average listener, what are they after? They want the sub to sound good of course, but they also want volume, don’t they? The more air you can compress and rarefy, the more volume you can achieve. A huge component of this is the enclosure. As most of you know, we at DD Audio believe that “Space Makes Bass.” You can read about in our “Does Size Really Matter” article. Having a lower compliance driver means the driver relies less on the air spring effect of the enclosure to remain in control, which in turn allows the user to put a sub in a larger enclosure to make more bass. This also holds true with the subs’ ability to keep it’s excursion in check at frequencies outside of the port’s control in vented alignments. This suspension will be able to satisfy 90% of users.

Extra Stiff Suspension – Designed for the most extreme SPL competitors.

Now, what happens when we add more to the suspension, add additional spiders, under the cone body and decrease the compliance of the speaker even further? Well, you’ve heard too much of a good thing, right? While it’s true that you could hypothetically put a stiff suspension sub in an even larger box, there is a point of diminishing, and even, no return where the listener simply won’t benefit from a larger enclosure for a given sized sub. In fact, users of the stiff suspension subs are almost exclusively high-level car audio competitors. The Extra Stiff Suspension is simply a means by which a competitor can shove more power into a sub without the driver exceeding its mechanical limitations (you know when the voice coil becomes a projectile). In this application, the suspension becomes so stiff that the sub will actually overheat over time near RMS power levels because the suspension is inhibiting the sub’s ability to cool itself. If the sub can no longer sustain itself for longer-term musical use, RMS wattage is basically thrown out the window and mechanical power handling becomes all that matters. It is here where users will see drivers accepting 10’s of thousands of watts for short runs of 3-5 seconds – just enough time to register on an SPL meter. Many of these users couple this suspension profile with a small enclosure to increase the mechanical power handling of the driver even further. This suspension is completely unnecessary for all but the most extreme SPL competitors.

When considering a build, there are a few relationships that the suspension will share with the enclosure being used for the build. These relationships will assume that spiders used for suspension are the only thing being changed.

The compliance of the suspension is not going to have a direct effect on the inductance of the sub. Applied power as a result of a stronger suspension will, however, affect the level of inductance observed in the coil though. A lower compliance driver will be able to accept more short-term power handling, as a result, a coil (inductor) will create additional back EMF which raises inductance.

Simple things like changing the suspension of your sub can have wide-ranging ramifications on a system. If you’re not sure how to build your subs for the stereo system you have in mind, you can always ask your local Authorized DD Audio Dealer, or give us a call at (405)239-2800, we’ll be more than happy to help steer you in the right direction.