Tech Talk: Why Breaking in Your Woofer is Important 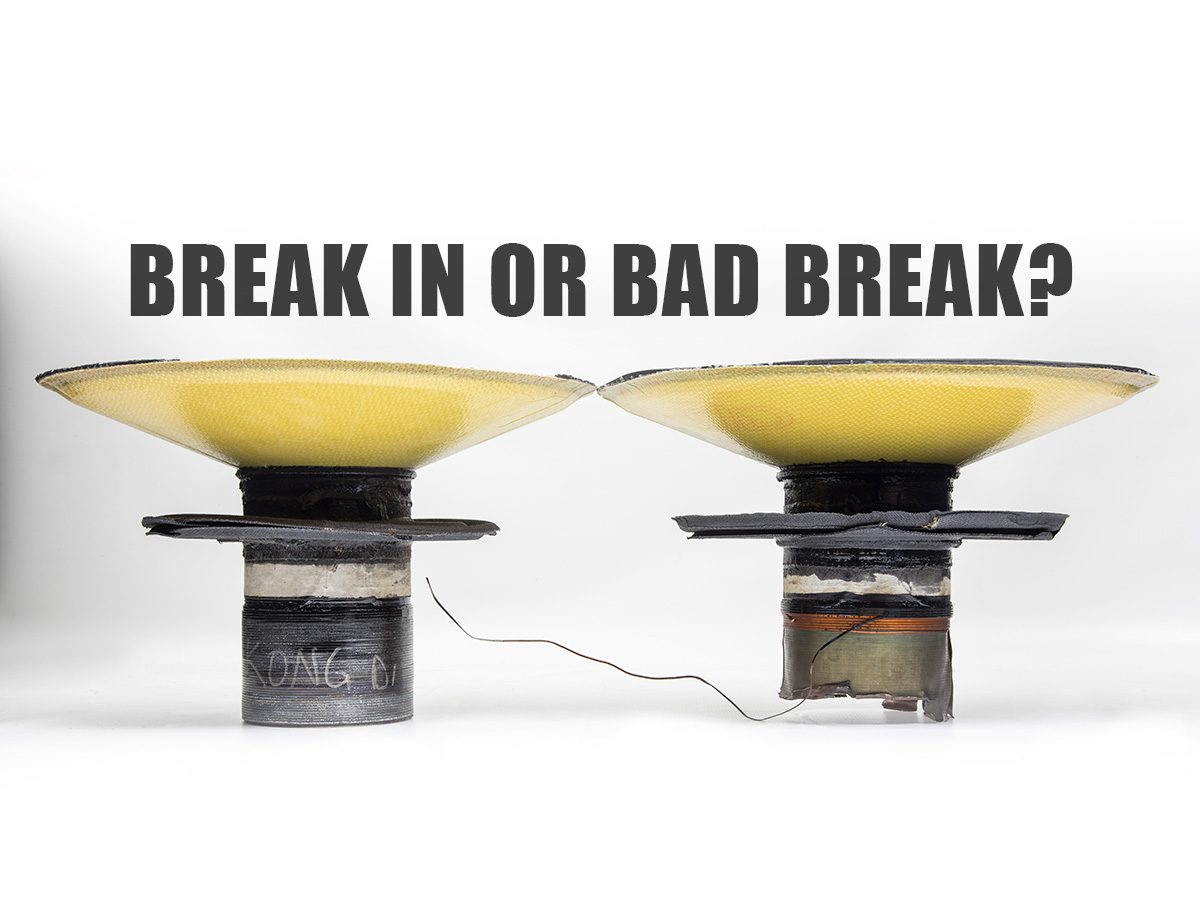 Tech Talk: Why Breaking in Your Woofer is Important

If you’re a frequenter of any online car audio forum or social media group, you’ve invariably run across folks talking about “Breaking In” their woofers. Breaking in a woofer is the process of playing a speaker in order to stretch or loosen the suspension on the driver and make it more compliant. This month’s Tech Talk Question comes from Derek in Pennsylvania who asks,

DD Audio subwoofers tend to be low compliance drivers. This means that our suspension tends to be pretty tight. Why would we do this, you might ask? It’s simple really, DD Audio customers demand the most from their woofers. Many people see something like a 9500 series woofer that is built to handle 2000 watts of continuous program power and think, “Gee maybe I should run that 3800 watt M3c amplifier on it.” Is it too much power? Potentially, but it certainly doesn’t stop people. To combat this DD makes the suspension strong enough to mechanically handle that kind of power.

As the woofer is played, the resins in the spider pack begin to break apart and soften. The woven poly-cotton fibers that compose the spiders begin to stretch out, and the surround has a chance to become more pliant. That’s why you hear us say, “Give it time – you’ll hear the woofer play louder and lower as it breaks in.” As the woofer breaks in, not only are the suspension parts softening up a bit, but that softening is also causing a shift in the electro-mechanical parameters of the woofer. Those that are familiar with T/S parameters may see shifts in the free-air resonance (FS) of the driver as much as 15-20%.

So how does this break in of the suspension make the woofer less susceptible to failing? Two major things happen as the woofer breaks in. The first and most important thing to happen is that the newly loosened suspension allows the woofer to move more. Greater excursion allows the woofer to more effectively cool itself. When the woofer moves, air passes over the voice coil, which allows it to cool itself (see animation above). So, more excursion is better for cooling. Granted, it is a delicate balance. Remember, we don’t want too much movement. That’s why we have to use this big beefy suspension to begin with.

The second thing that improves as a result of breaking in a woofer is the impedance curve of the woofer. Going back to FS, or the free-air resonance of the driver, the FS of the driver is the frequency at which it has the highest volume output with the lowest power input. Generally this means it is the point of greatest efficiency for the driver when not under the influence of an enclosure. As the woofer breaks in, this efficiency shifts to a lower frequency, meaning that it takes less power to create the same output at a lower frequency.

Now, what actually happens in practice? When a woofer has a given power handling that is the thermal point at which the woofer can effectively dissipate the heat being put into it. When that power handling is exceeded, it runs into thermal creep. The woofer will get hotter and hotter until its adhesives can no longer hold itself together. Often times the woofer will heat up fast enough as to liquify the resins that hold the coil onto the voice coil former and you can get a slinky. If the woofer is properly broken in, the woofer will cool itself better and the coil is more likely to hold together since there’s a more gradual temperature increase. Regardless, broken in or not, a user can still destroy their woofer. However, a broken in woofer will take more abuse and will be more capable of defending itself against someone who decides to “send it.”

The pictures above are directly from the DD Kong. In the 2018 Show Season, the Kong shelled 2 woofers. The first woofer lasted until the last show on the Kong tour. The woofer had been played so long that the tinsel lead finally started to tear while playing sub 20Hz frequencies. The coil, while charred and burnt looking is still fully functional. When the woofer was rebuilt, it was not given any break in time to normalize with the 5 other well broken in woofers. When the system was played to its full potential, the new woofer’s movement was inhibited significantly when compared to its counterparts. This inhibited movement created a rapid heating of the coil which caused the resultant “slinkied” coil.

So what’s the moral of the story? Break in your woofers!