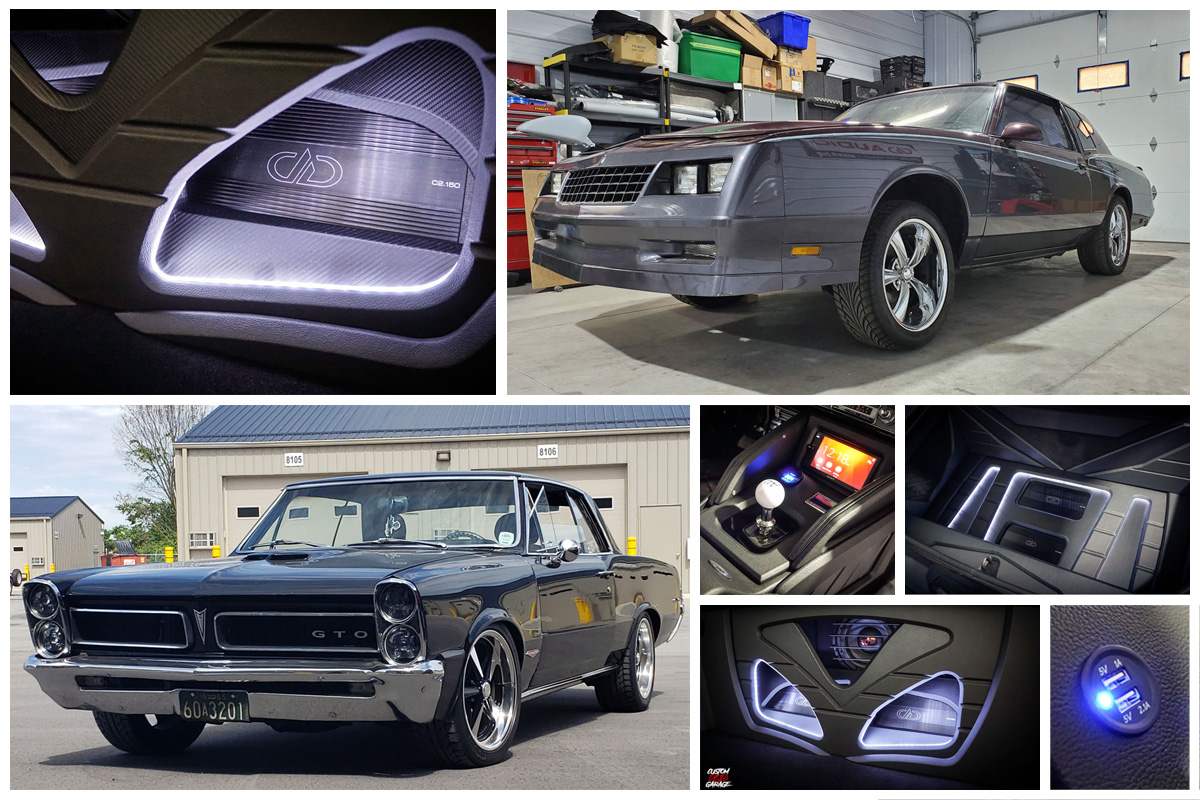 This month’s feature runs hand in hand with the previous pair of our DDownlow Tech Talks, Equipment Choice Part One and Part Two, as we are highlighting a pair of recent projects from the talented staff out of Greenwood Indiana at Driven Auto Salon which perfectly illustrates how equipment choice is not only a big part of any install, but how the installation itself can take the equipment, no matter how modest, to the next level. Owner Jeremy Reed is no stranger to dealing with a wide array of customers, and as such has developed a knack for knowing exactly what equipment is necessary to satisfy a customers requirements, often exceeding their expectations in doing so.

As many of you may have seen on their popular YouTube channel, Octane TV, these two builds took some trick fabrication to accomplish, and the master level fabricators at D.A.S. even took the time to sneak in some subtle but stunning styling cues, such as tastefully mixing vinyl patterns and even using wood grain tones to differentiate the builds from one another. The expert backlighting subliminally showcases the exquisite workmanship they have come to be known for.

For the first trunk, the owner of the 1965 Pontiac GTO had it built primarily as a blacktop monster. Between the heavy duty motor swap and all the go fast goodies that accompanied it, the original sound system that came with the ride into the shop was… ill prepared for the task at hand. Luckily, he was smart enough to bring this classic piece of American Muscle to a savvy and knowledgeable Authorized DD Audio Dealer, and a recipe was whipped up for sound that would compliment all the other hard work that went into making the GTO a serious piece of eye and ear candy.

While another brand of drivers was chosen for the interior of the vehicle, Jeremy insisted that all of the visible gear not only match, but perform to their expectations. Since the GTO was built more with performance in mind, it was important not to load the hot rod down with a ton of extra gear. The solution was simple enough. A compact powerhouse amp, the C4.100 was chosen to drive the mids and highs to their potential, while another diminutive yet mighty amp, the C2.150 was chosen to power one of our compact but impactful loaded enclosures, in this case, the ten inch model, LE-M10. The client’s goal was to have a clear, crisp sound that he could hear over the exhaust, and D.A.S. expert product knowledge delivered that in spades, choosing two Class A/B amps to drive the loads and sound scintillating doing it. By going with a substage that wouldn’t demand a ton of power, but still offers a prodigious amount of output, they were not only able to get the sound they were after, but also able to keep weight gains to a minimum, as well as leaving plenty of room in the trunk for that methanol injection system! It is this kind of forethought that produces the best results from the best possible system setups and is proof positive that a little planning can go a long way.

Speaking of planning and having a long way to go, our second vehicle, a Monte Carlo SS, is still well off from being completed as a drivable vehicle, but that didn’t stop the crew from the Custom Fab Garage show on Octane TV on YouTube from plotting out exactly what would be needed to take this build from another G-Body race car (complete with roll cage, ready for the track) to an absolute show stopper. Utilizing their signature fab skills to panel out the entire trunk in their bespoke, class laden, perfectly executed style, Jeremy and his staff truly had a blank canvas and had to rely on their years of expertise to properly prepare the space available to house just enough stereo to be able to jam on those cruise nights, without having to jeopardize any of the performance the car is clearly getting ready to receive. To achieve this audio excellence, a full false floor and support system was created to securely house the pair of DD Audio amps and the pair of DD Audio loaded enclosures tucked up on the package tray.

The LE-M08 pair will be able to play to their full potential, receiving their motivation from our resident mighty mite of an amp, the DM1000a. They also chose to employ the same C4.100 as was utilized in the GTO, but since this vehicle is destined for the street/strip, it was clear that a powerful front stage would be absolutely necessary. For this, Jeremy knew just the trick, employing the high output VO-M8’s for mids up front, backed up by a set of VO-B3a’s to compliment them. Rear fill is something that can really round out the sound of a system, and for that duty their go to was the DC6.5a component set. This choice of drivers will allow not only for some midbass fill to help the substage blend with the VO madness up front, but also allows skilled installers like the fellows on Custom Fab Garage (as seen on Octane TV on YouTube) to really dial in the soundstage by finding the ideal placement for the auxiliary speakers.

Even though the trunk is the only part of the build that is finished so far, it is that fit and finish that have definitely set the bar for the rest of the build. If the remainder is pulled off with as much careful planning and attention to detail as the immaculate trunk treatment, we may have to revisit the entire build for a solo feature upon completion.

Big thanks to Jeremy Reed and all of the staff at Driven Auto Salon for sharing their progress on these vehicles, and for more in depth looks at these and other builds they have completed, or even for some “How To” and fabrication instruction videos, keep your eyes glued to the Custom Fab Garage show on the Octane TV channel on YouTube. You might pick up a skill or even find that elusive idea that helps you with your own custom built masterpiece. Just remember, the best results almost always begin with the best planning, and these two works of art are living proof.